We write about OSINT methods, tools and techniques.

It is well known that Russia’s oligarchs and their enterprises are used by the Kremlin to help achieve its foreign policy objectives. This approach provides flexibility, cost-effectiveness, and, particularly for Wagner, plausible deniability.

This post is the third part of a series about the Russian PMCs. Our first post mapped the connections between Russia's security services and private military companies. In our previous post, we visualized the connections between Russia’s geopolitical ambitions and the group’s military deployments. In this installment, we add another dimension by showing the global web of its founder Yevgeny Prigozhin’s commercial interests, and how those mirror Wagner’s movements. And in our final piece, we reveal the influence operations which support Moscow's friends in Africa.

Prigozhin is at the helm of a vast commercial empire within Russia and it has expanded abroad alongside his private army. With our Digital Investigative Board, we can portray the intersections between Wagner deployments, Prigozhin’s overseas business, and regions of interest to Russia.

From Putin’s Chef to private general

Prigozhin earned his moniker as “Putin’s Chef” because of the range of catering businesses he operates inside Russia. These include upscale restaurants like the St. Petersburg-based New Island where he met President Vladimir Putin and hosted dignitaries such as the former U.S President George W. Bush in 2006. Prigozhin, through his catering conglomerate Concord Management, also holds contracts worth millions with the Russian Ministry of Defence and public schools.


It is this proximity to Russia’s circles of power that made him the ideal agent to head the Wagner Group, a Ministry of Defence project that he was reluctant to run. However, Prigozhin later began to reap the benefits as Wagner’s head.


We map out the global network of companies and the proxies known to be associated with Prigozhin, basing our data upon U.S. Treasury sanctions designations and the work of the global Wagner-watching community.

We now know that the Wagner Group serves as a Russian on-the-ground instrument in places where it seeks to meet strategic goals through military force. Wagner’s quasi-private status benefits Moscow by lowering the blowback that comes from dead Russian soldiers.

It also profits the commercial interests of Prigozhin. Since becoming the head of Wagner in 2013, the number of companies he owns that do business abroad has grown in tandem with increased Russian involvement in the Middle East and Africa.

We use oil interests as an example of how he has leveraged the benefits from conflict zones where Russia is involved. In Syria, the regime in Damascus has awarded contracts to develop oil fields to three companies we can identify as owned by Prigozhin: Evro Polis, Mercury, and Velada.

Wagner has long been involved with securing Syria’s energy resources since the days of its predecessor, the Slavonic Corps. In March 2016, Wagner supported the Syrian army in recapturing the city of Palmyra from ISIS which opened the door to oil-rich eastern Syria. Four months later, Evro Polis was registered in Russia and soon signed a deal with the Syrian Petroleum Company.

In Africa, the lines between Prigozhin’s commercial endeavors and Wagner’s deployments are similarly bright.

You can see how we portray a set of coinciding operations by Wagner mercenaries and Prigozhin-related companies with the help of our dashboard. In Sudan, the Central African Republic and Madagascar, Wagner is training local forces or guarding commercial enterprises belonging to the oligarch. 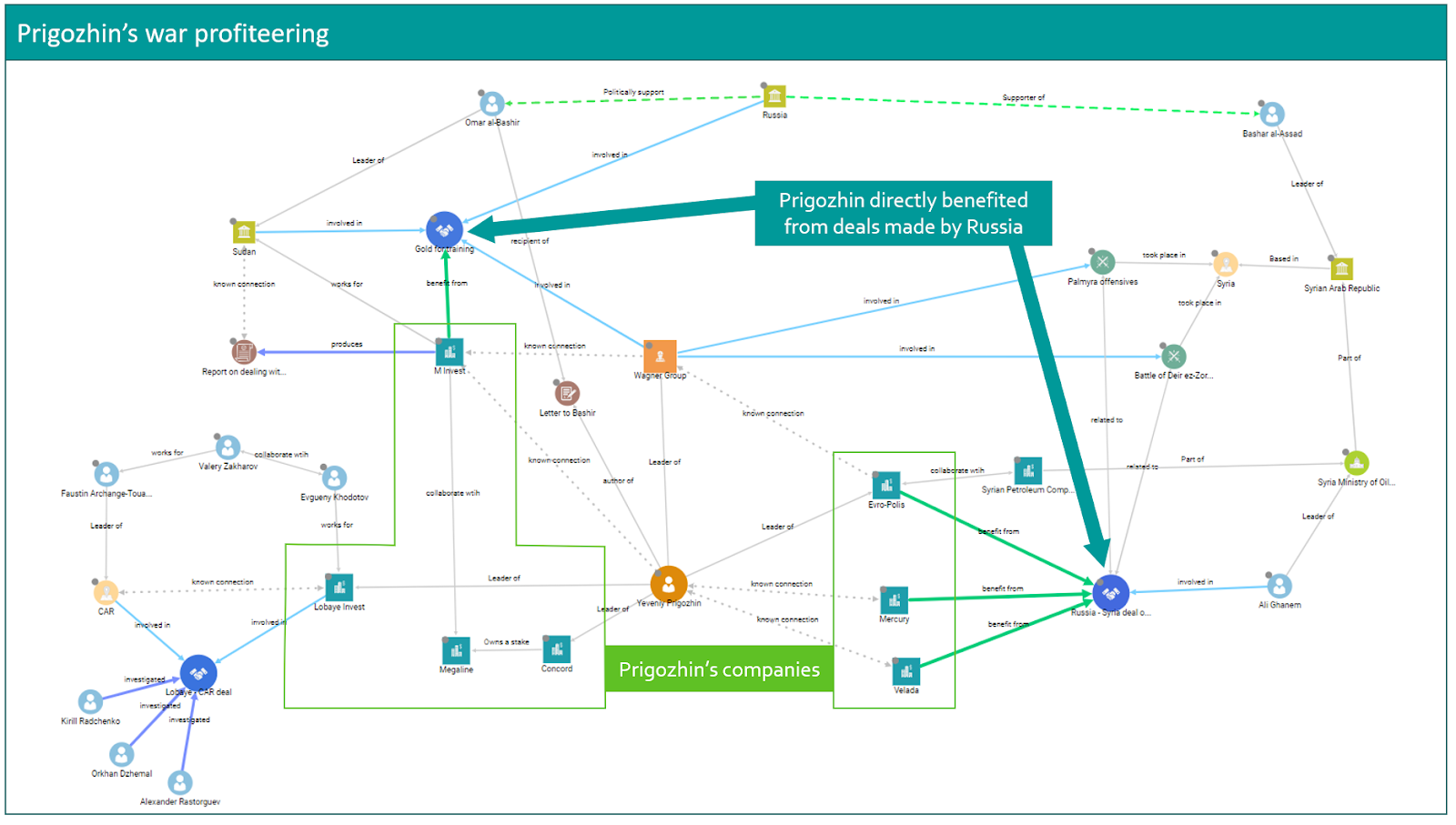 Being able to tell where the interests of Russia’s business elite end and those of the Kremlin begin is not easy. Constrained by Western sanctions and a sluggish economy, Putin has developed a predilection for encouraging geopolitical entrepreneurship by his inner circle in service of the state to compensate for these limitations.


Prigozhin, being behind the Wagner Group, is essentially the face of this murky blend of commerce and statecraft. We portray this through his presence at important meetings between Russian and foreign leaders in countries where his business interests coincide with the Kremlin objectives.

Several episodes from 2018 embody this approach:

That year, a Prigozhin-owned jet carried members of the Russian military’s General Staff to Khartoum following the fall of the former President Omar al-Bashir. In Sudan, Wagner has been training local Sudanese forces while another company connected to Prigozhin has attained gold-mining rights after a meeting between al-Bashir and Putin held in Sochi. That company, M-Invest, advised al-Bashir’s regime on how to crush budding protests against him as seen in leaked documents.

In the CAR, Wagner mercenaries also train local troops while simultaneously guarding mining operations performed by a Prigozhin entity called Lobaye. These activities were investigated by Russian journalists from the Dossier Center and it is believed to be the reason behind their murder in July 2018.

Finally, Prigozhin was pictured at a meeting between Russian military leaders and General Khalifa Haftar in late 2018. This coincided with British media reports of a Russian military presence in eastern Libya. We could not identify any of his companies beyond Wagner involved in Libya, but Moscow has long been interested in renewing contracts worth billions won during the Gadhafi years.

Prigozhin’s foreign adventures have not been without consequence for Wagner. In February 2018, scores of Wagner fighters were killed in American airstrikes when they attempted to seize oil facilities occupied by Syrian Kurdish militants. Evro Polis had earlier signed a contract for these fields and it is reported that the advance was not ordered by Russian military leaders.

Alongside Evro Polis, other Prigozhin interests have been targeted by the U.S Treasury. Last month, M-Invest, a web of Hong Kong-based companies linked to it and other Prigozhin assets were hit with new sanctions. Included was the same jet used to ferry Russian leaders to Khartoum following al-Bashir’s ouster.


Since being placed in control of the Wagner Group, we see how Prigozhin’s private empire has expanded with his army, paving his way from a catering oligarch to a geopolitical player. These advances showcase the way the Kremlin and its insiders leverage one another to acquire personal wealth at the same time as meeting foreign policy objectives.


In our final installment, we will focus on the influence operations that follow the Wagner Group abroad. This will complete our series on how Wagner and Prigozhin work to achieve Russia’s end goals in the Middle East and Africa.

*This investigation and all accompanying vizualizations were made with the help of reKnowledge Digital Investigative Board. Click here to learn more.

reKnowledge is making complex research more efficient and faster by combining the human and the machine in a symbiotic fashion.